With the 2020 U.S. Presidential Election just days away, results from a sweeping multinational survey suggest that young Africans are acutely aware of and appreciate the influence the United States asserts on the continent, with 74% of the 4,200 (aged 18-24) polled from across 14 sub-Saharan African nations citing that the United States regularly impacts modern-day African affairs and 83% suggesting that influence is positive. 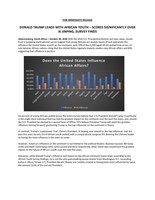 Six percent of young Africans polled across the entire Survey believe that U.S. President Donald Trump in particular is the single-most individual that has had the greatest impact on the continent over the past five years, and, should the U.S. President be elected to a second term of Office, 22% believe President Trump will wield the greatest influence moving forward, positioning Trump as the top influencer on the continent in future.

In contrast, Trump’s ‘superpower rival’, China’s President, Xi Jinping, was viewed as the top influencer over the past five years by only 2% of African youth polled, with a comparatively marginal 9% deeming the Chinese leader as having the most influence in the years to come.

However, America’s influence on the continent is not limited to the political theatre. Business tycoons Bill Gates (13%) and Mark Zuckerberg (10%) came second and third respectively, when asked who would have the greatest impact on the future of Africa’s youth over the next five years.

Moreover, while Donald Trump’s influence and impact on the African continent looms large, according to the African Youth Survey findings, he is not the only policymaking power-broker from Washington D.C. resonating today in Africa; former U.S. President Barack Obama was notably viewed as having been more influential by twice the amount (12%) of the current President.

These and other discoveries stem from the inaugural African Youth Survey (AYS), the most comprehensive research on Africa’s youth to date, commissioned by the Ichikowitz Family Foundation (IFF). The Survey, conducted by PSB Research (part of WPP Group), involved face-to-face interviews with young Africans held across the major urban centres of Congo Brazzaville, Ethiopia, Gabon, Ghana, Kenya, Malawi, Mali, Nigeria, Rwanda, Senegal, South Africa, Togo, Zambia and Zimbabwe; a project meant to develop foundations for a better global understanding of a demographic that is all too often misunderstood.

With China having fast become a central player in Africa’s infrastructure development and urbanization push, with a large percentage of the continent’s infrastructure initiatives being undertaken by Chinese companies or supported by Chinese funding, only a slightly smaller percentile (79%) of African youth surveyed believe China heavily influences the continent’s affairs than compared to the United States (74%); the European Union (EU) was thought to hold great influence by seven in ten (70%) of those polled, with the United Kingdom comparatively viewed as influential by just over one-half (54%).

Africa, one of the final frontiers of the fourth industrial revolution and today one of the fastest urbanizing regions of the world, presents tremendous opportunities for international investment. However, the African Youth Survey’s sponsor, industrialist and philanthropist Ivor Ichikowitz, has voiced concern that a new ‘Scramble for Africa’ between ‘great powers’ such as the United States and China, could lead to the development of a modern form of ‘economic colonialism’, contending that Africa’s next generation can and should play a greater role in charting an equitable, mutually accountable and beneficial path forward.

“The United States is seeking greater relevancy within Africa, a huge market opportunity for America largely ignored for far too long, yet one which would clearly be well received by African youth, our study indicates,” Ichikowitz stated.

“Yes, Africa needs investment from the U.S. and from around the world. However, our next generation has realized that through innovative breakthroughs in digital technologies (many of which they themselves were responsible for), and prowess to create thriving agribusiness, renewable energy and manufacturing sectors, we have rapidly become too entrepreneurial, too important to ignore.

“The United States must recognize the ‘opportunity continent’ that Africa has swiftly become; one with a cross-continental spirit of entrepreneurship, 61% of our youth agreeing their country is building a climate for innovation and entrepreneurship to thrive. Eight in ten (81%) believe that technology will change the fortunes of Africa and just under eight in ten (79%) further deem Wi-Fi connectivity today a human right. This is the world’s largest collective marketplace of the future shouting to the world that while they are autonomously highly-capable, they have established a start-up culture and are willing to shape new forms of partnerships. This information offers unique insight and direction on the role the United States can and should play in Africa.

Ichikowitz added: “It’s further important to recognize the deep influences American culture, American politics and indeed the actions of American policy-makers have woven upon our continent’s social fabric, our very value system. Decisions taken in Washington have a profound impact on Africa. Our diverse cultures dating back centuries have long frowned upon change from abroad and scrutinized the notion of individual success; yet today, our young people admire the US type celebrity-status success can bring, and are paying greater attention to not only the opportunities for achievement but more importantly, the systemic challenges that have hindered it.

“They continue to bear witness to downward pressures on African exchange rates and prolonged import dependency, with little protection to external shocks to the global supply chain, including commodity prices which often hit Africans first and hardest. Although born into independence, our continent’s colonial history has also not been forgotten by its young people – nearly seven in ten (66%) believe colonialism still affects their communities today and nearly one-quarter (24%) believe it defines African identity the most. They can easily translate the economic measures imposed on our continent on a daily basis; nearly seven of ten (68%) of Africa’s youth, according to our study, continue to believe foreign government investments serve as a modern form of economic colonialism.”

“And so despite the unique opportunity which we present to our American partners, make no mistake – We are reclaiming our economic sovereignty nation on nation and are prepared to play a leadership role at the negotiating table with the United States.” Ichikowitz continued.

In 2018, the Trump Administration created a new development finance institution, the US International Development Finance Corporation (IDFC), comprising $60 billion to support US companies in Africa and around the world, doubling the budget of the former Overseas Private Investment Corporation (OPIC) development agency. However, while what followed, the Trump Administration’s Prosper Africa initiative, launched last December by then-U.S. National Security Advisor John Bolton in an effort to “…promote international trade and commercial ties to the benefit of both the United States and Africa” marked the first in decades robust African-oriented investment program undertaken within an American President’s first term of Office, many at the time contended it was largely fixated on counterbalancing the inroads of rival superpower, China.

Kimberly Ann Elliott, a visiting scholar at the George Washington University Institute for International Economic Policy, argued that sub-Saharan Africa may soon find itself caught in the middle of a cold war once again; this time, between the U.S. and China.

Moreover, in “…safeguarding the economic independence of African states and protecting U.S. national security interests,” through ‘Prosper Africa’, Ms. Elliott contended that the $50 million-budget for Prosper Africa serves as “…a drop in the bucket compared to the [Trump] administration’s proposed 9 percent cut in overall aid to Africa”.

“We encourage our friends and partners in the United States, the nation’s leaders from the private sector, the next President of America following November’s pivotal elections, to collaborate openly in effective investment opportunities on the continent and engage with us in constructive, two-way dialogue,” Ichikowitz concluded. “If we are however to be in the middle of a trade war between the U.S. and China in future, our next generation will make sure that we will no longer be a casualty”.

The Ichikowitz Family Foundation understands that discerning findings such as these can be used as valuable resources in informing good public governance and corporate social responsibility (CSR), and therefore plan to administer the Survey on an annual basis in future.